Travel tip:  If you come to Buchinger Wilhelmi on Bodensee, make sure you depart before the end of August!

We went from perfect sunny resort weather to clouds and rain — like Seattle!  We’ve got this for the next few days.

We had a little break from the rain today right now (4pm here), so I took a photo of what this place looks like with cloud cover.

Fortunately, our morning walk today stayed on gravel roads to avoid the muddiness of the dirt trails, and we were provided umbrellas to take along with us. 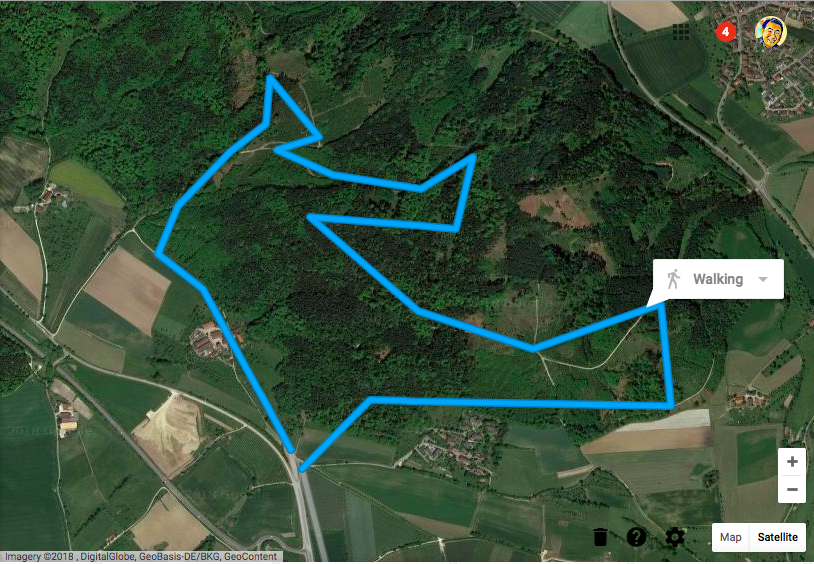 And, even for the daily activities, Buchinger Wilhelmi handles the weather well with umbrellas at the entrance of every building.

Still, my wife and I agreed that if we ever came back, we’d schedule our trip two weeks earlier!

I have not had great historical success with doctors in the US in treating my diabetes.  My doctors have been too quick to insist on prescribing drugs that do not work over the long term for my situation, and they have not changed their views quickly enough to match as new data emerges.  Without exception, all of them warned me about the dangers of fasting without the time or the willingness to review the research.

Here at Buchinger-Wilhelmi, the doctors acknowledge that medicine is not a science but rather trial-and-error.  (For those interested, there’s a very good Freakonomics podcast series on this topic!)  My doctor here in Germany acknowledged that what she was originally taught (give diabetics frequent small meals per day) was wrong, which I knew to be true based on the progression of my own disease.  My German doctor and I even had a great conversation about Yoshinori Ohsumi, a 2016 Nobel Prize winner for his discovery of mechanisms for autophagy (self-reparation) in cells, triggered by fasting.  Upon getting here, I felt something with a doctor that I hadn’t felt in the past — a true willingness to engage in discussion rather than simply prescribing medicine or “standard of care.”

My experience in the US was not atypical. A study published in the Journal of General Internal Medicine found that:

On average, patients get about 11 seconds to explain the reasons for their visit before they are interrupted by their doctors.  Also, only one in three doctors provides their patients with adequate opportunity to describe their situation.

The commentary in the release associated with this study goes on to say:

Monday night, my wife and I attended a lecture here at Buchinger Wilhelmi on doctor-patient relationships.  Given that Buchinger Wilhelmi has a long history of utilizing alternative therapies for a worldwide audience that are not practiced in the guests’ home countries, they provide more formal instruction on this meaty topic.

It turns out there is rich history of medical ethics surrounding patient autonomy versus paternalism in making health care decisions, and the advocacy position that Buchinger takes here is that neither extreme is optimal.  The key is to have a relationship with your medical doctor.

This history stems back to Ancient Greece where priests and doctors were one in the same.  Challenges exist today because of the demands of the current healthcare system, so doctors (while many well-intentioned) are often under time pressure and have a tendency to “repair” rather than communicate.

I walked away with several recommendations:

The advice: if you aren’t successful with these approaches, switch doctors!

From an interview with Giovanni Maio, German physician and professor of bioethics and medical ethics at the Albert-Ludwigs-Universität Freiburg:

The patients have a great power, I always wonder why they did not use them. You can penalize the doctors who do not devote time to them. Just do not go and see another doctor.

There’s the answer to the question from Germany.

Thanks to all those who messaged me privately about the temporary pause in blogging! We are still alive and well!

We’ve been immersed in the Buchinger experience, and we’ve been taking advantage of the program! Even though we’re not allowed to use mobile phones outside our rooms, I had to use something to keep track of where to be!  The image above is a screen shot of our schedule over the last three days!  The program here runs from 6am to 8:30pm.

Buchinger uses a very holistic approach to fasting and well-being, which combine medicine and complementary therapies.  Some highlights from the last three days include:

And, we’ve had a couple of really cool hikes!  (You can click on the images to get more information about the sights!)

Future topics deserving of their own blog posts include:

Today was good and bad.

On Sundays, the walks here at Buchinger Wilhelmi start at 8:30am instead of the usual 6am time both to attract a bigger group and to allow for longer excursions. Today, we went to the highest lookout point between Lake Constance and the Danube, referred to locally as the “Höchsten Aussichtspunkt.”  It was a nice, leisurely 4 mile walk, and we were rewarded with a great view at the end!

While the walk was a great start to the day, the middle of the day took a downward turn.

Once fasting, you get an enema every other day here at Buchinger Wilhelmi.  The issue here is that fasting reduces your stimuli to poo, but having small quantities of food means that small amounts of digestive juices and bile are still produced, the mucous membrane peels away, and intestinal bacteria and epithelial cells must be removed.

The argument they make here is that while some people view enemas as unnatural, brushing your teeth is also unnatural but necessary due to modern nutrition.  Intellectually, this all make sense to me.

However, my candid opinion is that the enema has the potential to be a day-wrecking event.  I was admittedly pretty uncomfortable not only having the tube stuck up by butt, but also having the nurse fill up my bowels with water.  The upside is that, unlike the Glauber salts which required me to stay by the bathroom for 5 hours, the flushing process with an enema is fast.  I was ready to leave the vicinity of the bathroom in a few minutes.  Sill, the downside is that I was feeling a little queasy afterwards.  I really didn’t even want the vegetable consommé that was brought to my room, but I drank it anyway.

The saving grace immediately after my broth was the hot liver compress!  I was unconscious at 1pm once I got my hot liver compress and felt much better after finally awakening!  My wife and I walked to the Überlinger Töpfermarkt, an annual pottery market on the lakefront, and enjoyed both the scene and the work of the artisans.  After that, I was totally ready for (and enjoyed!) the light gazpacho at dinner time!

There really is a system here at Buchinger Wilhelmi to even handle the unpleasantries of intestinal cleansing!

Note: We also heard from others here that you can opt out of the enemas in favor of other laxatives.

I was not looking forward to Day 2 of the fast.  At Buchinger Wilhelmi, that fear is unfounded.

The “Do it Yourself” Experience

I’ve tried water fasting before on my own, and Day 2 is always miserable.  Day 1 is usually easy because you get to burn your glycogen stores.  It’s Day 2 when your body goes into gluconeogenesis, and things can get uncomfortable!

THE GLUCOSE RESPONSE CURVE. True hunger occurs when glycogen stores are depleted, so that gluconeogenesis can be avoided. (Source: Nutrition Journal, 2010)

Here at Buchinger, day 2 is a breeze.

Part of the Buchinger formula to get to ketogenesis (fat burning) without the pain is through careful control of what comes out of your body and what goes in!  A summary:

Outside the clinic, this is referred to as a fasting mimicking diet, where you still consume small amounts of food but “trick” your body to get the same therapeutic benefits of fasting!

The other thing starts on Day 2 is a hot liver compress.  The concept is to heat the liver to improve blood circulation and liver function during the fast.

Every day at about 11:45am, the nurse places a wet towel over your upper abdomen, puts a hot water bottle over the towel, and then swaddles you snugly using another cloth.  I don’t know whether it really makes the liver function better, but it definitely put me to sleep in the middle of the day, and made me feel great!  Quiet time at the clinic lasts at the clinic until 2pm.

After that, you get hot tea served in your room!

This felt like such an awesome mid-day pampering.  My wife joked that she’s never going home!

Today is our first day of fasting, and there is a system here at Buchinger-Wilhelmi.

To start off the fasting, I was given two supplements to be taken through the duration of the fast.

Note that diabetics should take magnesium supplements anyway, as diabetics excrete magnesium along with the glucose through the urine.

Warning: this is a bit gross.

Right after my morning nurse visit, I was given my Glauber salt.  Basically, you get three things:

Then I was instructed to stay by the toilet for the next 5 hours.  Good advice.

For me, this wasn’t as bad as it sounded.  While excreting liquid feces out my butthole is never pleasant, at least this was not accompanied by the chills or dizziness that comes with food poisoning.  This was sort of a “clean” diarrhea experience, if there is such a thing!  (Update: my wife read this and told me I omitted a key piece of packing advice.  Bring Charmin from the US.  The toilet paper here at the clinic is a bit “rough!”)

The doctor here told me that cleaning out the digestive system prevents people from getting hungry, and I have to admit that was true.  I did not feel hungry at all.

That said, this is a pretty traumatic start, and both the doctors and nurses sagely advise to take it easy the day of Glauber salt.  There are many activities on the calendar here at Buchinger Wilhelmi, and I didn’t take advantage of any of them today!

By 6pm, both my wife and I were ready to take our vegetable consommé in the salon.  She had the pumpkin broth.  I had the turnip broth.  Both were good!  We also got to meet a few folks who shared the common experience.  I actually kind of enjoyed the bonding, and I think it’s a key part of the experience fasting as a group.